A version of this article was originally posted on the Open Society Foundations web site.

An aspiring government watchdog in Armenia faces an uphill battle. Weak safeguards against corruption and a government-dominated media have led to widespread distrust of elected officials and most news outlets. A recent Open Society Foundations report cites the country for “lack of independence of regulatory institutions, non-transparent media ownership,” and a slow-developing media sector. 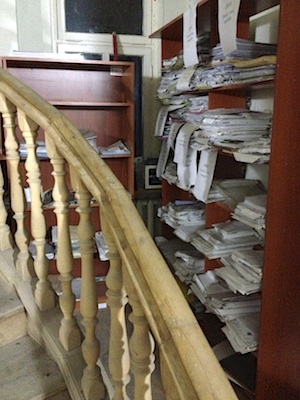 Asparez (or “Arena”) hosts one of the country’s top 10 news web sites, Asparez.am. To foster public knowledge and government accountability, they are also tracking public funding to schools and regional governments, then posting and charting the results online at PublicData.am.

Launched in 2010 with support from the Open Society Foundations, the site shows revenue and spending for schools and provincial governments across Armenia. Asparez gathers this data in a steady march of 3,500 Freedom of Information (FOI) requests sent annually to over 900 communities and 1,400 schools, as well as to several governors and ministries. Few local jurisdictions operate online, which means the Asparez team manages most submissions and replies on paper, updating the site manually.

It is the kind of tech project that could easily fizzle, relying on an antiquated bureaucratic process and on the small Asparez staff. To understand why it has thrived, one needs to look beyond the technology to the process that drove the project and to Asparez’s use of Freedom of Information requests as a lever for public accountability.

HURIDOCS, a tech-centric NGO based in Geneva, built the site, drawing on several decades of experience managing human rights information and technology. Executive director Daniel D’Esposito says HURIDOCS’s history with NGOs has led to a more explicit emphasis on capacity development. “We had a tools approach when we started,” he says, “but we need to now move to a higher level, looking at information strategy, more coaching-driven.”

Katherin Machalek of HURIDOCS says the fit between Barseghyan’s strategy and the HURIDOCS approach was a good one. Because Asparez already had some FOI data in hand, she and her team “could begin discussing how it should be arranged on the website for maximum advocacy impact.”

She says Barseghyan brought two things that NGOs do not always provide: realistic expectations and “a clear understanding of what could and should be done with the data.”

You’d think this kind of two-way dialogue would be at the core of any advocacy tech project, but too often technology groups repeat whatever process they’ve grown accustomed to providing, and organizations think more about what they already know and not enough about how to adapt for digital communications.

Elizabeth Eagen of the Open Society Information Program says questions of adaptation and readiness are important to effective funding.

“By working with technology intermediaries like HURIDOCS, our grantees can develop more advanced tools, but with enough support to take ownership at their own pace,” says Eagen. “There’s still a lot to be learned about balancing ambition and realism with tech, and that applies not just to other Caucasus projects, but to grantmaking in other regions.”

Technology and transparency share a counterintuitive reality: Each is a tool that’s only as effective as the process surrounding it. Seb Bacon, an expert in digital transparency, says that good tools accomplish the most in “an active advocacy culture.”

Currently a lead developer at OpenCorporates, Bacon helped develop Alavateli, a software that runs FOI request sites in more than 10 countries. “NGOs need constantly to be making the economic, cultural, and political case for FOI, to counter the arguments that it’s costly and frivolous,” he says.

Still, the culture of government accountability has a long way to go in Armenia. Recognizing this, Asparez wields another tool to secure information when its requests are refused or ignored: the court system. In the four years since Asparez began its FOI campaigning, they have brought 55 lawsuits seeking full compliance under the 2003 federal FOI law. Barseghyan says they have won or resolved 54 of those suits.

As Asparez and other transparency groups in Armenia work to establish a culture of information access, the PublicData.am site is one link in a cycle of activities that includes public education, accountability in the courts, and old-fashioned shoe leather and ink.

It doesn’t hurt that Barseghyan and the Asparez team are journalists. They naturally understand that data publishing is just another form of news publishing. “Where possible, NGOS and activists need to find ways to cooperate with mass media,” Barseghyan says. “If it is not possible, then NGOs need to create mass media.”