Internet Governance Report: Human Rights Are Not a Bug

The engineers who oversaw the emergence of the global internet believed that network growth always benefits the public interest. There was a deeply entrenched assumption that the internet is an engine for good—that interconnection and rough consensus naturally promote democratization and that the open, distributed design of the network can by itself limit the concentration of power into oligopolies.

This has not proved to be the case.

During 2021, I had the privilege of editing this report by Dr. Niels ten Oever, on the odd, risky, and critical links between human rights and the management of the internet’s infrastructure—the matrix of services, connections and rules that keep the internet running.

The evolution and unique culture of internet infrastructure is as interesting as it is revealing about the dangerous moment we’re in now. As we say in the report, “The commercialization and privatization of the internet that began in the 1990s was expected to bring about innovation and competition. In practice, it has led to the emergence of oligopolies.”

The report explores why the cluster of internet governance bodies—the IEEE, ICANN, the IETF and others—operate as they do. And why changes to their practices and culture are needed.

See a few key excerpts below, or find the full report on the Ford Foundation website.

The internet’s defining characteristics—its distributed architecture and its decentralized governance—offered the promise of improved access and greater freedom for everyone, but the internet has not exactly delivered on it. Instead, the very structures and practices established to maintain the internet widened the gap between the promise of a public good and the more complicated present-day reality.

Increased connectivity, together with the rejection of centralized authority, has facilitated uneven power in internet governance organizations. The consolidation of the technology industry has granted some groups more influence than others over the internet’s infrastructure, and provided them with greater means to introduce standards and to send representatives to participate in the processes.

As a result, the very thing that has made internet governance efficient—the tradition of a minimal mandate to increase interconnection and interoperation—has also thwarted a norm of collective action in the public interest.

The habit, the reflex, of inquiry for any proposal remains to ask if it might hamper interconnection across networks. Historically, proposals to consider the societal impacts of a technology or policy have been met with resistance along these lines.

This report examines the background and impacts of the internet’s multistakeholder governance, and offers recommendations to civil society, corporations, governments, and academics for aligning internet governance—and internet infrastructure—with the public interest and human rights.

It recommends foremost that all actors support practices that consider the public interest impact of all technology and policy decisions, and that internet governance organizations adapt their processes and procedures to ensure the meaningful involvement of all those impacted by their decisions.

Those who develop and govern the internet’s infrastructure can ensure
its foundational safeguards against harm and inequity by adopting human rights impact assessments modeled on the UN’s Guiding Principles as an inherent part of policy and technology development;2 by broadening advocacy and methods for engagement between civil society and internet governance organizations; by lowering the barriers to participation for people outside the regions, companies and demographics that historically have dominated the governance bodies; and through longitudinal investment by donor organizations to help pilot and sustain new practices, among other steps described at the end of this report. 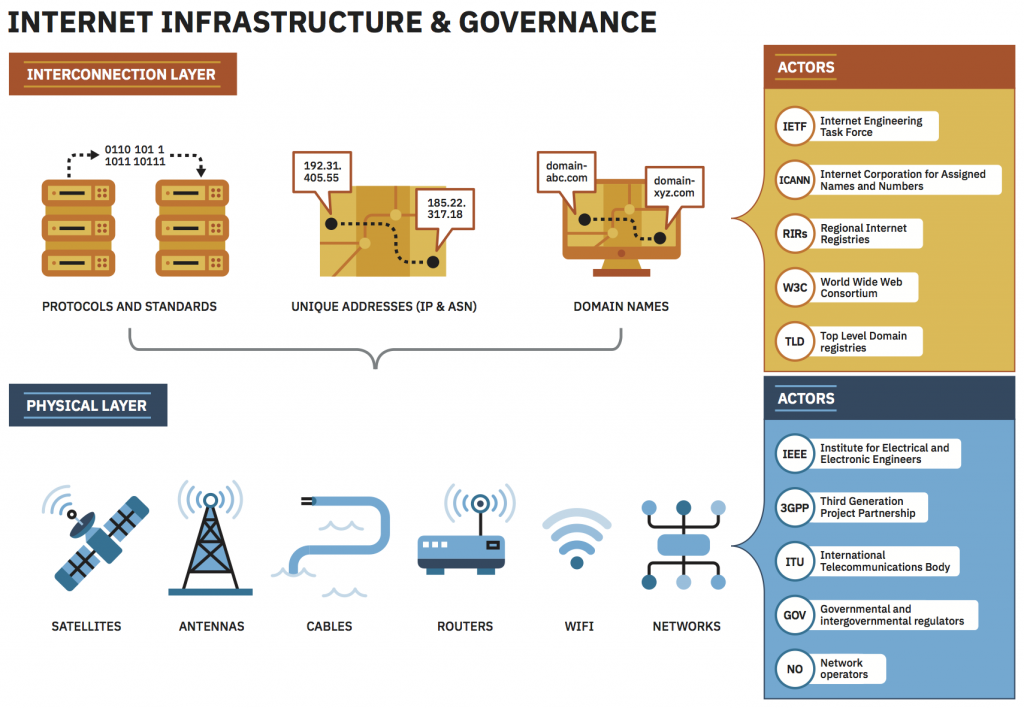 From the report, this illustration capturing key elements and actors in internet infrastructure governance was created by Nook Studios, Greg Straight and 3 Bridges, adapted from Niels ten Oever and Giovanni Lombardi and XPLANE/ICANN. Full report design by Michael Wiemeyer of Designlounge.