giving digital pitchforks their due 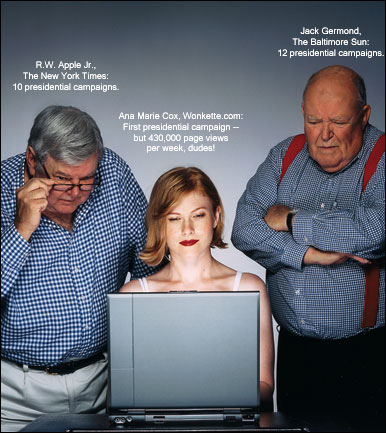 The microscope of big media continues to focus more clearly on what makes the blogosphere tick. Matthew Klam’s NYT Mag article does a really nice job highlighting how the pace and the tone of blogging is helping change our national conversation, and even dragging the reluctant giant of big media into the new faerie light cast by the monitors of monitors like Josh Micah Marshall, Kos and Wonkette.
But oh how I wish the Bigs would grow up and portray the Blogs without the Kooky Kids sensationalism, which perpetuates an onus of marginality that bloggers and others in online media can no longer claim.
Don’t believe me? Then see the photo below, or take the lead paragraphs of the Klam article as an example…

Nine blocks north of Madison Square Garden, next door to the Emerging Artists Theater, where posters advertised ”The Gay Naked Play” (”Now With More Nudity”), the bloggers were up and running. It was Republican National Convention week in New York City, and they had taken over a performance space called the Tank. A homeless guy sat at the entrance with a bag of cans at his feet, a crocheted cap on his head and his chin in his hand. To reach the Tank, you had to cross a crummy little courtyard with white plastic patio furniture and half a motorcycle strung with lights and strewn with flowers, beneath a plywood sign that said, ”Ronald Reagan Memorial Fountain.”
The Tank was just one small room, with theater lights on the ceiling and picture windows that looked out on the parking garage across 42nd Street. Free raw carrots and radishes sat in a cardboard box on a table by the door, alongside a pile of glazed doughnuts and all the coffee you could drink. The place was crowded. Everyone was sitting, staring at their laptops, at bridge tables or completely sacked out on couches.

Sound familiar? Maybe a little like Samantha Shapiro’s cover story on the Dean kids in the same magazine in 2003:

When the adults leave, usually around 10 p.m., the aisles between cubicles are still cluttered with scooters and dogs; when they return in the morning, balancing just-microwaved cinnamon buns and coffee, they climb over pale legs poking out from beneath their desks and shoo sleeping volunteers off their office couches.

It could be the stereotypical alarm of the establishment over the untidy and obstreperous new generation, like the tea party stiffs in the movie Hair freaking out when Treat Williams, John Savage and their merry band appear. Or the more insidious resistance of the power elite when faced with a pirate broadcast from an untrackable locatiion.
But I think the reason old media still covers new media so clumsily is just a tin ear. The power structure and publishing processes underlying traditional media devalue the principles that make the blogosphere and collaborative media possible: multiple voices, instant commentary, stories that iterate over time and unapologetic bias, among others. (See Jack’s article for particularly pragmatic insights on the need for a longer memory at traditional outlets.) Like asking your bank vice president great uncle from the suburbs to talk about his feelings.
A trend in blogterpretation that’s even more alarming is to relegate the raw feed of new media to the mosh pit of partisanship:

It’s almost as though, in a time of great national discord, you don’t want to know both sides of an issue. The once-soothing voice of the nonideological press has become, to many readers, a secondary concern, a luxury, even something suspect. It’s hard to listen to a calm and rational debate when the building is burning and your pants are smoking.

Well, almost. It’s hard to listen to packaged pablum and bloodless punditry when your blood is boiling and the sharper-than-credited public intellect is craving a real fucking exchange.
And we’re not gonna get it in the debates, either. Check out Open Debates, whose founder I saw on Bill Moyers last night. George Farah is among the most poised, articulate critics of our sound-byte culture I’ve ever heard.
The public sphere is alive and well. It won’t be otherwise until the government actually behaves like an outright dictatorship and we all live in The Handmaid’s Tale. Until that time, look for more and more people to take up the digital pitchforks of blogs and RSS feeds and, in the immortal words of perennial iconoclast Pat Buchanan, head for the sound of the gunfire.

The Wonkette is more fun to read than Daily Kos. She’s also more fun to hang out with. Before we went off to the fabulous party that Americans for Tax Reform were throwing at the New York Yacht Club on Monday night, we had time for an expensive dinner at a really nice restaurant in SoHo.

Hmm. Maybe Matt’s got stars in his eyes, or some of Wonkette’s less political points. Reads to me a little like a Jay McInerney interview with Julia Roberts I read in the early 90s.