EMK: a life under pressure 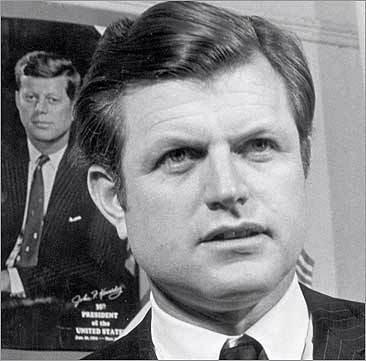 I am neither American royalty nor likely to ever be as accomplished as Ted Kennedy, but I felt unexpectedly connected to him yesterday when TV pundits were speculating about the crushing pressure he must have felt in 1962, when he became a senator (apparently despite his president-brother’s reservations about three Kennedys with that much power at once), and then again in 1968, after the assassination of RFK, when all eyes turned expectantly to him as the presumptive, redemptive future candidate for president.
Pressure, I understand. Not at the national level of course. But when you’re over-subscribed, or working late at night, or a few weeks behind, it sure can feel national. So my respect for him has been transformed in the last 24 hours, when I try to imagine enduring that level of pressure, suffering in myriad ways, but never leaving your post and somehow finding, as Gail Collins put it last night, “his own purpose at which he was better than anybody else in the world.”
The other time I felt this moved was during Kennedy’s speech last year in Denver. The legacy of the JFK era often seems distant and cliche to those of us born too late to watch it live on TV, but watching this speech, I felt for an instant a direct connection to a moment when (at least so I’m told) a generation believed in its own potential to do things differently, like there was a silver thread connecting my own excitement about the last election backward to a post-Eisenhower, pre-Watergate excitement I’d only ever heard about in stories and songs.

Obviously, there were times when he faced pressure and did not meet the challenge squarely, but, like the play says, take him for all in all, we won’t look upon his like again.
I’ve also been appreciating all the quotes from Doris Kearns Goodwin. You want someone like her around for times like this.