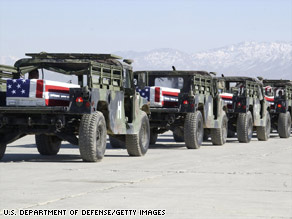 Right. Because war has a cost. Some of the soldiers may be children, but we are not a nation of children.
“The Pentagon will lift its ban on media coverage of the flag-draped coffins of war victims arriving at Dover Air Force Base in Delaware, Defense Secretary Robert Gates said Thursday.
But the families of the victims will have the final say on whether to allow the coverage, he said.” … from CNN.com.