regime change on less than $1 billion a day 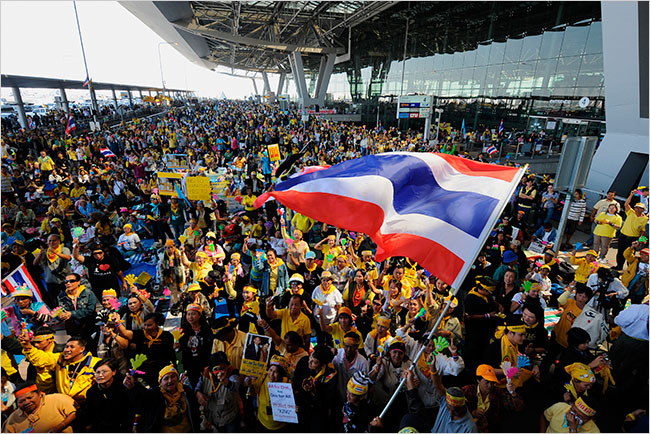 John McCain and President-elect Barack Obama raised nearly $1 billion between them to get to Election Day. In Thailand, everything changed in a single day, after mass protests and a court decision to disband the ruling party.
You can say that mass chaos is no way to change a country. You can say that the Republican loss last month showed that U.S. citizens still know how to “throw off” a bad government and “provide new Guards for their future security” peacefully.
But we sure could use that billion dollars right about now.

“I’m glad, I feel relieved, it’s like something that we have been carrying is now gone,” said Tonkla Maksuk, 49, a volunteer nurse at the airport protest. ““I feel that this is still a country of laws.”
The protesters have paralyzed the government and blockaded Bangkok’s two main airports. They have occupied the offices of Mr. Somchai and his cabinet at Government House in central Bangkok since August. Mr. Somchai’s resignation has been their principal demand, and they have charged that he is a pawn of the fugitive former prime minister, Thaksin Shinawatra. It was unclear, however, if the court’s ruling would bring the crippling demonstrations to a halt.