libby: the verdict was already in 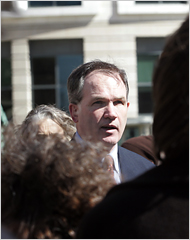 What makes me gladdest about the Scooter Libby verdict is that of course Cheney and Bush are tarnished by this. After this sedate but excellent circus, only the most partisan ostriches could think there was not a high level plot to discredit a respectable war critic by any means necessary.
I feel silly even saying it aloud – it’s common perception and that’s very very satisfying, even if not litigable. An acquittal would have cast doubt over the common perception, so it’s not like the true court and the court of perception don’t have a vital link – but after everything we’ve been through, I don’t think there’s a doubt in people’s mind about who was pulling the strings. And that helps.
From NYT analysis: “In the end, after a painstaking, 10-day dissection of the evidence, the 11 jurors found the case presented by the prosecutor Patrick J. Fitzgerald inescapable: The well-documented misstatements of Mr. Libby were not those of an innocently forgetful man but of a calculating serial perjurer.”
Joe Wilson response, from ThinkProgress …